Patient Rights at the Center of a New Report The Myxo File X by Dr. Nalini M. Rajamannan

The final clues are falling into place in a 12-year-old mystery about how patient protections were bypassed during open heart surgery for hundreds of patients and published in the American Association of Thoracic Surgeons Journal. The Society celebrated their 99th anniversary in Toronto, CA this May 2019. . 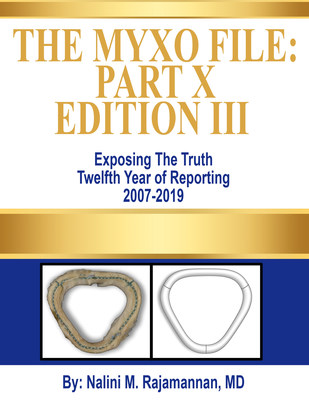 The Model 5100 heart valve ring was implanted into nearly 700 patients without their consent or approval from the Food and Drug Administration.

Documents recently obtained through a Freedom of Information Act request outline how this practice escaped regulatory notice and an ongoing cover-up by Northwestern University Human Subject Protections office to protect patients from HARM.

On Thursday, one of the Model 5100 patients was in a Chicago courtroom, seeking a new trial in a malpractice lawsuit due to the newly released documents. Her petition alleges fraudulent concealment of critical information, which is now public. The defendants asked for the petition to be dismissed and have a month to file documents explaining why they are not moving forward on the newly discovered FDA FOIA which falls under Northwestern University FWA federal laws. The patient's attorneys will have 21 days to respond.

"He was putting it into patients, seeing how it worked, and not telling them," Obermeier's attorney Adrwin Boyer said during opening statements of the 2016 court trial in Cook County, according to Fox 32 in Chicago.

Meanwhile, a cardiologist who removed herself from the Model 5100 device study when she realized patients hadn't given their consent, published a report on Saturday (May 4) to highlight key facts and documents in the case:

Rajamannan's report, The Myxo File X and the Myxo Report, offers a comprehensive look at the Senate Finance and Senate Judiciary Investigations from 2008-2014 for the 667 heart valve patients, media, regulators, lawmakers and patients' rights advocates.

The Myxo File X published Saturday, May 4, 2019 on Amazon.com also provides an in-depth analysis by Dr. Rajamannan, an eye-witness to the human experiments, regarding the release of responses sent to the Senate.

Dr. Nalini Rajamannan is a heart valve expert in the field of cardiovascular medicine. She has been researching heart valve disease for 31 years. She earned her undergraduate science pre-professional degree from the University of Notre Dame, her Medical Doctorate from Mayo Medical School and her post-graduate training in Internal Medicine and Cardiology at the Mayo Clinic. She also worked at the Mayo Clinic as a staff consultant in Internal Medicine. Currently, she practices consultative medicine specializing in Cardiac Valvular Heart Disease at Most Sacred Heart of Jesus Cardiology and Valvular Institute, WI.

Company
Most Sacred Heart of Jesus Cardiology and Valvular Institute

Compose your email to Nalini M. Rajamannan at Most Sacred Heart of Jesus Cardiology and Valvular Institute.